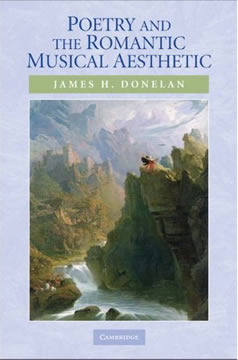 Poetry and the Romantic Musical Aesthetic

James H. Donelan describes how two poets, a philosopher, and a composer – Hölderlin, Wordsworth, Hegel, and Beethoven – developed an idea of self-consciousness based on music at the turn of the nineteenth century. This idea became an enduring cultural belief: the understanding of music as an ideal representation of the autonomous creative mind. Against a background of political and cultural upheaval, these four major figures – all born in 1770 – developed this idea in both metaphorical and actual musical structures, thereby establishing both the theory and the practice of asserting self-identity in music. Beethoven still carries the image of the heroic composer today; this book describes how it originated in both his music and in how others responded to him. Bringing together the fields of philosophy, musicology, and literary criticism, Donelan shows how this development emerged from the complex changes in European cultural life taking place between 1795 and 1831.

Self-consciousness and Music in Early Romanticism: Hölderlin, Hegel, Wordsworth, and Beethoven
Director:  Cyrus Hamlin
The dissertation describes how music became a metaphor for the philosophical problem of self-consciousness at the beginning of the Romantic period, affecting musical and poetic composition.  Analyses of Hölderlin’s late poetry and Hegel’s aesthetic lectures demonstrate the German Idealist transformation of aesthetic theory; interpretations of Wordsworth’s Prelude and Beethoven’s String Quartet No. 13 in Bb trace the development of a musical concept of Romantic self-consciousness.

Department of Comparative Literature, The University of California, Santa Barbara

Department of English , The University of California, Santa Barbara

Department of Rhetoric , The University of California, Berkeley

The Literature Major and the Department of Classics, Yale University


Other Publications and Lectures

“Hegel and the Machine: Scholarly Self-Creation in the Digital Classroom” Conference on College Composition and Communication (CCCC), New York, March 23, 2007

“‘Near and Hard to Grasp’: Interpretation and the Ontology of Poetry in Hölderlin’s Translations.” American Comparative Literature Association, University of Puerto Rico, Rio Piedras, April 11-14, 2002.

“Power and the Aesthetic in the Systemprogramm Fragment.” American Comparative Literature Association, University of Colorado, April 20, 2001.

Back to J. Donelan's Course Page